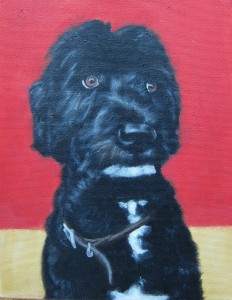 Tito was our family dog; he was a very good dog except for when he wasn’t. He was occasionally neurotic, and had a few bad habits like eating anything that wasn’t secured.

Like any beloved family member, we have stories about him.

It was 4:38 am when Tom woke me to tell me Tito had died. He had been sick the night before, so it seemed possible . I crawled out of bed to find Tito curled up on the chair in our bedroom where he normally slept. We stood over him mourning his passing. I remember repeating “poor Tito” as I choked back tears. At first I was hesitant to touch him knowing he was dead. I resolved to pet him and after about 30 seconds he woke up. Then I think I might have punched Tom.

Creature of the night

On another occasion, Tito was restless and whining in the middle of the night. He wanted to go out. I took him to the basement and out the back door. The night was warm. As I stood on the patio, Tito headed down the rock steps deeper into the yard.

I heard some unusual rustling so I called him to come. He came up the steps and as he turned the corner heading into the house I saw he was carrying something, an animal; its eye caught the light and flashed pink. By the time it had registered, Tito had disappeared into the house. OMG, he brought it into the house! My heart pounded. I called him frantically to come. A second later he reappeared with his dog puppet. Phew, my mind was playing tricks. With a sigh of relief we headed back into the house. We didn’t get far.

In the middle of the basement stairs lay an opossum, bloody, not moving. I ran back out the door. Tito followed me, and as I excitedly told him to go back in and get it, he just ran circles around me (literally). I freaked. A wild animal was in my house. My sleeping family was in my house. All I could see was carnage.

I ran to the front of the house, found the hidden key, unlocked the door and ran upstairs to get Tom. Tom jumped out of bed and without missing a beat, tore down stairs, grabbed a plastic bag from under the sink, and headed for the basement.

He was naked, with a plastic bag, ready to remove the thing with claws and teeth… I threw him a towel for protection. He scooped up the opossum and took him out the back door and placed him on the grass. About 10 seconds had passed from me opening the front door to the beast being jettisoned. From a safe distance we stared at the bloody marsupial, still not moving; it looked like a supersized rodent from Homer’s nuclear plant.

The next morning there was no sign of the opossum. We had a blood stain on our basement stairs for years until we replaced the carpet. For a while Tito would stop to smell it. It was a continual reminder for me of the event. Tito wasn’t allowed out in the middle of the night for a long time.

Stay tuned for more Tito stories: Sun Lakes mishap’s : the steak, the muzzle, and the hole in the bedspread; The car door; Synchronized swimming; Issues with food; and Perpetual Tito.