In 2000 I interviewed with the Consumer Prototyping and Strategy team at Microsoft. From what I remember of the job description, they were looking for someone who could think outside the box developing prototype demonstrations for the future.

One idea was showing up for the interview in a 50’s apron with matching garb, while sporting a tray of visually enhanced cookie. Already with Microsoft, I had been managing a design team and asked my then colleagues what they thought of the idea. Their response was quick, wide eyed, and followed by “I wouldn’t do that”. 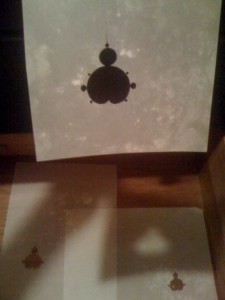 Even though it was corporate America I decided to take the risk. If they were really looking for something different, they wouldn’t be off put by my humorous yet respectful gesture. And if they were offended, I likely wouldn’t have fit in.

I arrived with my apron, a retro hair style, and fresh homemade cookies: classic chocolate chip, triple ginger, and cherub coins (a favorite from my childhood).

Because I love connecting things, I added a powdered sugar stencil of a fractal image on top of the ginger cookies; marrying math, science, and hearth. Luckily they got the point and I got the job. 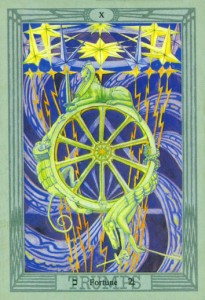 New Year’s Eve 2000, prior to interviewing I  experienced an event that foretold the outcome of this job opportunity.

In mid-December (of 1999) I was ready for a change and applied for 2 jobs within Microsoft: one with the Connected Home team, and the other with the Consumer Prototyping and Strategy team.  The Connected Home folks responded and scheduled an interview for me after the holidays. I hadn’t heard a peep from the Prototyping team; so figured they weren’t interested.

Meanwhile, for the coming 2000 millennium my friends and I organized a big community New Year’s Eve party. We had a bunch of activities, and one friend brought a Tarot card reader.

Always interested in different perspectives, I asked for a reading. She guided me to ask a specific question as I shuffled the cards.

I asked if I would continue working at Microsoft and if so doing what?

She turned over a few cards and told me I would continue working at Microsoft. Then she hesitated for a moment. With a puzzled look on her face she said I would be working on something to do with a home. At that time Microsoft was not known for anything close to being home related. I said great, I’d applied for a job with the Connected Home and had an upcoming interview.  Then she hesitated again and said it would not be the job I thought it would be. I mentioned I had sent resumes for 2 jobs, one was home related and one was a prototyping team that hadn’t gotten back to me. She replied asking if it were possible that they were both home related? She also said the reason the other team hadn’t responded isn’t for the reason I had thought. She continued saying once I started talking to them it would happen quickly and while the job would be challenging, I’d be ok.

She was right about all of it.

Will I risk cheesy humor upon interviewing? It depends upon the context.

Will I ask the cards? Definitely.